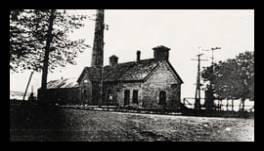 The building that is now The Meaford Museum was build in 1895 by McQuillien and Co., Toronto as the Town’s Pumping house.  It included a pump house, filtering basin, brick and timber tanks, 4 miles of mains and 33 hydrants.  A brick chimney was added a few years later for more efficiency.  An electric pump and an auxiliary gas pump were added in 1924 and later the Public Utilities Department moved in.  During the 1940’s the chimney was removed and both the Public Utilities and Public Works departments relocated and the building was left empty.(Pump House Museum) 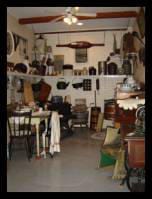 Later, the Kent Women’s Institute collected donations from local families to be used to open the building as a museum.  As the collection grew, more renovations were required and in 1997 more rooms were renovated to provide better lighting and more display space plus an office.  The windows were covered and Gunter Neumann donated beautiful painted murals to replace them.  An addition was put on the front of the building for a foyer and gift shop.  The final addition was the “Fire Truck Wing” to house the Meaford Fire Department’s loan of their 1938 Bickle Maple Leaf Fire Truck.  In 1999 an outbuilding known as the “Farm Shed” was added to the north end of the museum grounds to house the larger farm implements. Renovations were again started in 2004 and the museum doors were closed for three years.  During this time improvements included, among other things, the leveling of the floors and creating access to the basement, a new heating and cooling system and improved gallery space.

There is also more space now for educational and research activities and (Kitchen Display)an area to store climate sensitive materials.  Washrooms were upgraded to provide wheelchair accessibility.On May 12, 2007, the museum opened its doors for tours again with a special event featuring free admission, snacks and entertainment from 10:30 – 4 pm.  Then on Sunday May 13 there was a Mother’s Day Tea from 1 – 4 p.m. as an opportunity to honour mothers who were admitted free.  Tea, coffee and goodies were served.  These opening specials were great chances for residents and tourists to see the new displays and improvements to the building while enjoying a relaxing pleasant afternoon.The purpose of the museum has always been to preserve and display articles that relate to the history of the former Town of Meaford and the surrounding area from the time it was first settled to the present. (This area is now known as the Municipality of Meaford).  It also aims at educating, informing and serving the residents of the community with its archives, genealogical research and by sponsoring walking and bus tours to places of interest and historic value. Anyone that is unable to go to the museum may request information they require on the Genealogical Information Request Form on their website.  There is no charge, but a donation would help offset the costs of the research.

Some of the displays feature industries important to the area, such as: apples, farming, the town hall, local police force, Beautiful Joe Park, Trout Hollow, John Muir, the Anglican Church windows, medicine in the 1880s and many others that feature organizations, early settlers, and attractions. There are a number of historical items, such as letters between John Muir and the Trout family, a carrying bag belonging to Louis Riel, and carvings by Erskine Brown.  The rooms and displays are designed to delight and please you; many exhibits have interactive components and tell fascinating stories of Meaford’s past.Displays are changed and new ones added from time to time so they may not be exactly the same every time you go.  For example from Jan. 19 to May 5 this year most of their early medical exhibits were loaned to Grey Roots Museum in Owen Sound for their exhibit “When Doctors Made House Calls” which covered the history of medicine in Grey County.  While these items were away the museum displayed a temporary exhibit “Life on the Farm in Miniature” displaying detailed miniatures of many pieces of farm equipment and buildings created by George Merrifield.They have several more traveling exhibits, special events such as tours and fundraisers planned for the coming spring and summer so drop in and talk to the friendly, helpful staff or check out their website. 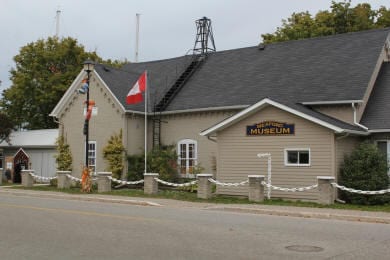 The town of Meaford possesses a rich historical background, from the opening of the Land Force Central Area Training Centre to the development of the Meaford harbour. However, few residents are fully aware of the history of this great town. Thankfully, a proud building located along the Meaford harbour is home to exhibits that make our history both accessible and entertaining. The Meaford Museum has been a vital part of the town of Meaford since its opening in 1961. The building was originally utilized as a water pumping station until the Kent Women’s Institute collected donations to transform it into a museum. Over the past 51 years, numerous alterations have been made to both the appearance and the nature of this historical edifice.In 2004, the museum endured an extensive renovation that altered the entire interior. With more office space, a genealogy and research room, and bigger and better exhibits, this renovation has allowed for the museum to flourish. More recently in 2009, a vestibule was erected to provide an accessible entrance for patrons. The impressive result of renovations and expansion within the museum has allowed for the structure to do justice to the rich history that lies within its walls.
Of the many exhibits within the Meaford museum, some of the most noteworthy are written legacies inspired by this town. 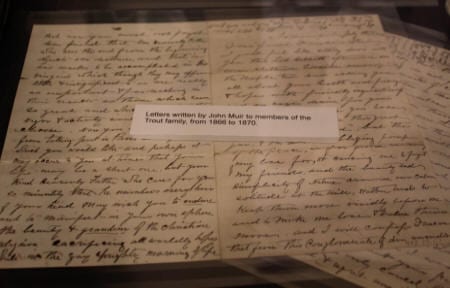 Letters exhibiting the correspondence between John Muir and the Trout family in the late Nineteenth Century mark the enormous impact that Meaford had on this famous naturalist. These letters are proudly showcased at the museum for visitors to witness, along with an opportunity to read the letters in their entirety in the book titled “The John Muir Letters to his Meaford Friends.” Additionally, the famous novel “Beautiful Joe” by Margaret Marshall Saunders is showcased in a large exhibit explaining the significance of this work to the town of Meaford.In addition to written works, the museum showcases a variety of interactive displays that are entertaining for adults and children alike. Visitors are given an opportunity to truly connect with exhibits through the museum’s interactive displays. Select exhibits contain a sign with a green hand and directions on how to enhance your understanding of the display by interacting with it. One example is the display of fossils that allows visitors to actually feel the rocks and to experience history firsthand. Gone are the days that children find museums to be boring now that they can be fully entertained by the innovative exhibits! 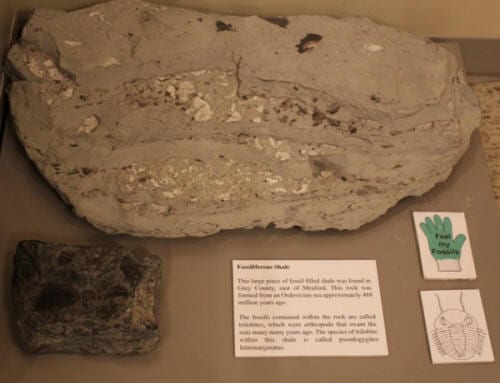 Overall, the history within the museum and the history of the museum itself pay tribute to the wonderful town that it resides in. The Meaford museum is a great place to spend the day and learn more about this great town.

The operational hours are:
Thursday-Friday 10am to 4pm
Saturday 12pm to 4pm

Map of the Meaford Museum