Welcome to Thornbury/Clarksburg, two small-town communities with big hearts. Located along the shores of Georgian Bay and just minutes from the mountain, these communities are a perfect place to live for people who love getting outside.

People love summer in Thornbury/Clarksburg. Many local restaurants have patios set up for you to enjoy the lovely weather and the views of the wonderful scenery. The Thornbury Harbour is also a favourite summer hangout spot & there are tons of local events in the winter.

Thornbury/Clarksburg is also an amazing culinary destination. Some of our favourite restaurants include the Bruce Wine Bar and the Corner Cafe & Grill. Thornbury is also home to the Thornbury Village Cidery & Brewery. 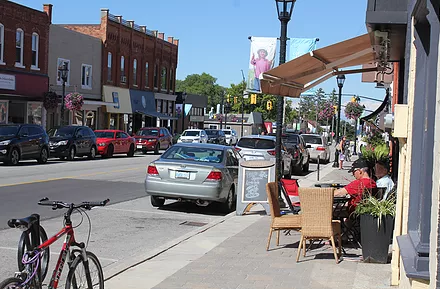 The main streets of Thornbury/Clarksburg are what the towns are most known for. Clarksburg’s Marsh Street, also known as Artsburg, has some of nicest art galleries in the area. The historic Hindle’s Hardware store has anything you may need and the Clarksburg Honey House has some of the best local honey you will ever taste. Thornbury’s Bruce Street has restaurants and stores lining the sides of the street. It’s a perfect place to find a last-minute gift or to take a special someone out for dinner. Some of our favourites include the Bruce Wine Bar and the Corner Cafe & Grill. Thornbury is also home to the Thornbury Village Cidery & Brewery.

People love summer in Thornbury/Clarksburg. Many local restaurants have patios set up for you to enjoy the lovely 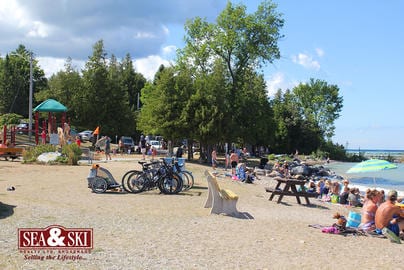 weather and the views of the wonderful scenery.  Locals and visitors alike love spending time down by the water in the summer as well, whether jumping off the pier or spending time on a boat, the Thornbury Harbour is a favourite summer hangout spot. But, if you’d rather spend your summer away from the water, there’s plenty for you to do; our roads are very popular with cyclists because of the rolling hills and beautiful surroundings, we also have two private golf courses and a public one, plus lots of parks and trails to explore.

In the winter, the snow doesn’t stop these communities from thriving. The Thornbury Arena is constantly busy with hockey games and public skates and the streets of Clarksburg are cozy and quaint under the falling snow.  Local events like Old Fashioned Christmas and The Clarksburg Tree Lighting help kick off winter and Christmas and the Annual Valentine’s Day Tea held by the Thornbury Girl Guides wraps up the winter season.  Thornbury/Clarksburg are just minutes away from various ski hills, snowshoe and cross-country ski trails, so there’s always something to do in the winter.

Thornbury/ Clarksburg have all the amenities you may need such as grocery stores, banks and post offices, with two separate hospitals that are under 20 minutes away.  There are plenty of small businesses such as restaurants, cafes and shops located on the main streets of Thornbury/Clarksburg.  With such a variety of locally grown foods, Thornbury/Clarksburg offers plenty of opportunities to enjoy local cuisine and even delve into cooking yourself!  Also close to larger centres such as Collingwood and Owen Sound with more stores, boutiques, department stores, large supermarkets, cinemas, and fine dining. Thornbury/Clarksburg is the perfect option to enjoy small town living and the small town lifestyle without sacrificing any convenience.

With such a variety of activities and points of interest, from fishing on the Beaver River, to spending a night out on the town, there is so much to do in the Thornbury/Clarksburg area. Add in the amazing beauty that surrounds you in nature and it is clear to see why Thornbury/ Clarksburg  draws people in from near and far to visit and live in!  And it’s only a 2 hour drive from the GTA and Kitchener/Waterloo.

The Municipality of the Town of the Blue Mountains continues to lead Grey County in most every category – the number of listings, number of sales and the average sale price of a home. 65% of all residential properties sold in April were in the one million dollar plus range, with several of those selling for more. In April, the number of new listings added to the market nearly doubled compared to March, and was 23% higher than in April 2021. The number of home sales, however, was down, by 15% from March, and by 30% year over year. April’s listings to sales ratio in The Town of the Blue Mountains has done a complete reversal from March, with listings at a 65-35 ratio to sales. The average sale price for a home in The Town of The Blue Mountains inched up a scant 1.5%, holding steady at roughly 1.3 million dollars in April. Thornbury, most likely named after the town of Thornbury in England, was first inhabited by Solomon Olmstead in 1848.  After being surveyed in 1833, the 900 acres of town plots lay vacant for years until water-power was harnessed by Solomon Olmstead.  Mr. Olmstead was the first miller of Thornbury and operated the largest mill located on the Beaver River.  Other prominent residents in Thornbury’s early history include: the Pedwell family; lumber barons who were well-known for building homes of grand stature, Thomas McKenny; the town’s first druggist and chemist, Dr. George Hurlburt; brother in law to Mr. McKenny and the towns first Doctor, and Mr. Snetsinger; another lumber baron and later mayor.

1856 saw the railway coming through from Barrie to Collingwood, which eased the distance with which residents had to travel to receive provisions and goods. Captain Oldfield, who owned the first commercial fishing operation on Georgian Bay, built the 1st brick mansion in Thornbury. This local landmark, situated on Bridge Street, still stands and is currently operated as a tavern and restaurant. Placed just south of Thornbury, is the small village of Clarksburg, so named after Mr. W. A. Clark who built the first woollen mill in 1861. This mill was one of the most important mills in the district and produced items such as blankets, tweeds, flannel, and other high end cloths. Wholesalers in Toronto, Montreal, and Hamilton placed hefty orders to the mill, proving what a prestigious business the mill was.

In addition to Mr. Clark, other early settlers to Clarksburg include: Mr. William Marsh and his son Mr. W. J. Marsh; who moved from Thornbury to open a small shop, Mr. John Tyson: who ran and operated the flour mill, Mr. Thomas Tyson; brother to John who took over operation of the mill for many years, Mr. B. J. Marsh; who for a short while was postmaster and later moved to Peasmarsh Farm, and Dr. Hunt; The first Doctor of Clarksburg. Two famous tight-rope walkers hailed from Clarksburg. The first, Jack Dixon walked the rope across Niagara Falls, which was an amazing feat! Also crossing the Falls, at a running pace of 2 minutes and 32 seconds, was Clifford M. Calverley. He performed various stunts while rope walking across Niagara Falls, such as walking at night, eating on the rope, and hanging by one foot. Ravenna’s first settlers were a man named Brock, George Walters, and Daniel Eaton; although, later Mr. Eaton moved to what is now named Heathcote.

Ravenna truly blossomed because of Mr. Walters; the first meeting of the Township Council was held at his home and he invested himself in the new habitants of the area. Heathcote, first called Williamstown after William Fleming, was home to the district’s first post office. The first postmaster was William Rorke, who with his family arrived in Heathcote during 1847. As another town in Ontario had the same name, Williamstown was later changed to Heathcote. William’s brother, Richard Rorke and his family was another early pioneer of Williamstown. By 1856, town residents held their first fair, showcasing an assortment of grain, vegetables, and livestock. The Town of the Blue Mountains was formed in 2001 when Thornbury and the Township of Collingwood were amalgamated.