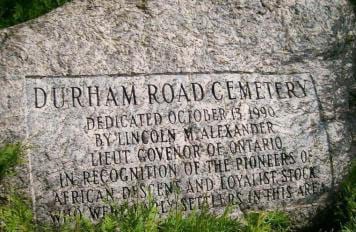 Winston Churchill once said, “Those who fail to learn history are doomed to repeat it”. Although this saying may seem drastic, it is important that we learn about our history so that we can understand what has happened and can move past it. February is Black History Month and it is essential that we take the time to understand the discrimination and hardships that these people faced.

Priceville, Ontario is a very small town just 10 minutes South West of Flesherton and has one of the most interesting Black Histories in the area. Black Loyalists from the War of 1812 were given this land on Old Durham Road (formally known as Durham Road B) from the crown for their dedication. They started developing the land in the late 1820s- early 1830s, where they built a school and a church with an old cemetery. However, white settlers came and forcibly removed the original Black Settlers from this area and the Black Settlers found themselves relocating to Collingwood, Owen Sound, and Oro.

These settlers had to leave many of their belongings behind and they felt like they were unable to return to the Priceville area. The people of Priceville tried everything to try and forget that that part of their history had even occurred. By the 1930s, a man had bought the property that held the “darky cemetery” and had turned it into a potato field. Many gravestones were found around town in people’s basements and buildings; in fact, one gravestone was used as a home base at the local baseball diamond. Even though many people in Priceville didn’t want to talk about this part of their history, by the late 1980s, there was a need for change in the community.

By 1989, a group in the community was formed to try and restore the cemetery on Old Durham Road. The group was trying to uncover the mystery of where the headstones went and they wanted to preserve the cemetery as best as they could. Many people were unsure about what the group was doing and during this time deep racial wounds were opened. However, the project continued. The group received an anonymous letter stating that they believed there were headstones located in the stone pile south of the school. The group managed to find pieces of 4 headstones and on October 13, 1990, the Lieutenant Governor Lincoln Alexander dedicated the Old Durham Road Pioneer Cemetery.

The group was unable to find anything underneath the cemetery. The group received another anonymous letter that they believed the other headstones were used as flooring for a local barn. Unfortunately, the owner decided to pave over the stones and they haven’t been able to recover them.

The history of the Old Durham Road Pioneer Cemetery shows us why we need to learn more about our past. The documentary Speakers for the Dead by David “Sudz” Southerland and Jennifer Holness captures the story of the Old Durham Road Cemetery and can be found here https://www.nfb.ca/film/speakers-for-the-dead/ if you would like to learn more. Take time to learn more about our rich history and honour the hardships and achievements African- Canadians have experienced.