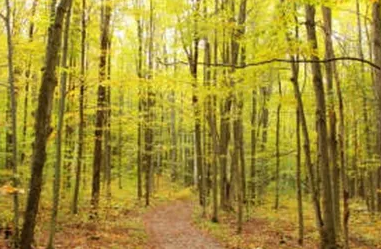 If you want to see Old Baldly and are traveling from Highway 10, you should head for Flesherton.  From downtown turn right onto Grey Road 4 for about 3 km then onto Grey Road 13.  You will see a sign Eugenia Falls Provincial Park.  If you want to stop and look at the lake then you should turn down Canrobert St.; if not, then continue on past the Beaver Valley Ski Club and the village of Kimberley.  As you drive along you will view the Niagara Escarpment rising to your east and west. There is 3 km of Niagara Escarpment cliffs, slopes and plains rising 130 m above the Beaver Valley floor.  Below the slopes are cliffs and terraces displaying various type of Manitoulin dolostones and Queenstone Shales.  Behind this is a rolling escarpment plain with glacial hills and bedrock exposed along the rims and on knolls.  You will see a large variety of trees including Sugar Maple, White Cedar, White Ash, and Mountain Maple. There are two major promontories on this site that are capped by Amabel dolostone cliffs.  Ravines and crevices separate the two peaks; one of the ravines is up to 340m long and 30m wide.  The larger of the two promontories is known as Old Baldy because it represents a large bald spot amid the forest of trees. 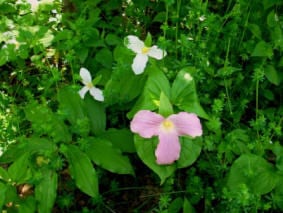 To reach this place from the north, from Thornbury go through Clarksburg and south on Grey Road 13.  From Meaford, you should turn onto Grey Road 7 heading toward Grey Road 13.  As you drive toward this junction you see the mountain looming up in front of you.  It is a wonderful spot to take a picture of it.

Old Baldy is on the eastern rim of the Beaver Valley and has an arch-shaped dome of hard Amabel dolostone illustrating the changes formed by the processes of erosion both past and present. It was highly glaciated during the ice age and the valley was widened and made smooth by the large rivers of ice that went by.  The soft under layers of the escarpment were eroded by glaciers and left the harder dolostone cap on top.  As large blocks of rock are separating it from the main cliff, Old Baldy is gradually separating itself from the main escarpment. The highest point of the mountain is 449.6 m above sea level and its sheer cliff has a vertical drop of 30.5 m illustrating one of the most dramatic changes in elevation in Grey County.  The total drop from the top of the mountain to the valley floor is 228.6 m. and is one of the most scenic and significant sections of the escarpment.

To reach the lookout for a spectacular view of the area below, turn off Grey Road 13 onto Euphrasia Sideroad 6-7 near Talisman Ski Resort.  You will be entering a 72-hectare conservation area that is managed by the Grey Sauble Conservation Authority.  You can also reach this area from Sideroad 3-4 that runs up the valley south of Kimberley.  There is parking but few facilities; except it does offer beautiful scenery and impressive views. 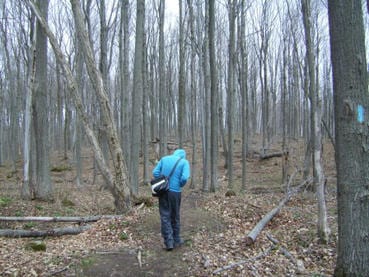 It will take approximately 15 minutes to walk through the woods of Maple, Oak and Birch trees.  During the spring and summer, you may also see ferns and flowers and when you reach the lookout a spectacular view of the valley. You will see fields, forest, ski hills and the Village of Kimberley.  You may also see some turkey vultures as they soar off the rim of escarpment.  This area can also be reached from the Bruce Trail Access simply by following the white blazes across the meadow and through the woods. Of course, if you are hiking you won’t want to stop here; this is only the first lookout point.

If you wish to hike further, continue to follow the Bruce trail markings, they will lead you through woodlands. In the spring there are patches of wild columbine and white trillium along with more breathtaking views from several lookouts along the way.  You may be able to see almost to Georgian Bay from the higher points.  Flowerpot rock formations that have broken away from the main cliff may also be seen.  Autumn is another pretty time for this hike when all the leaves are changing colors with displays of red, yellow and orange for as far as you can see.

There is also an opportunity to do some rock climbing, but you will have to get a permit from the Grey Sauble Conservation Authority and abide by their list of rules and regulations.

How Was Old Baldy Formed?

Living in the Beaver Valley we often take for granted the natural beauty that surrounds us. Old Baldy, situated on the East side of the valley provides us with a great spot for hiking, family picnics, rock climbing and beautiful views of the valley. But how was Old Baldy formed? Honourary Professor Stew Hilts from the University of Guelph spoke at the Canada Day celebration at the Kimberley Hall and discussed how Old Baldy was formed.

Millions of years ago, this area was covered by a gulf, similar to the Gulf of Mexico. This gulf extended from Lake Huron to the state of Wisconsin. During that time, if you looked to the Southeast, you would be able to see the peaks of mountains which formed today’s Appalachian Mountains. These mountains were suspected to be taller than the Himalayan Mountains and as these mountains eroded, they filled this area with a layer of red clay, known as Queenston Shale. Queenston Shale is known for developing long, gentle slopes, which is why this area is perfect for skiing.

After a period of time, the gulf over this area was filled with many marine organisms that were high in calcium carbonate. As these organisms died, they formed a layer of hard limestone, known as dolostone. On Old Baldy, there is a 10-15ft cliff known as the Manitoulin Formation which jets out from the rest of the escarpment. If you look across the valley from Bowles Hill to Old Baldy in the winter, ¾ of the way up the mountain, you’ll be able to see the thin, flat layers of limestone that the Manitoulin Formation is made up of. If you hike North or South from the power plant, you will be walking right on top of this limestone.

On top of this dolostone is Cabot Head Shale, which is another layer of red clay. This clay is the reason why there are many springs coming out of Old Baldy. Since water is able to percolate through the limestone but is unable to move through the clay, this water comes out through Old Baldy as springs.

420 million years ago, a coral reef formed on the outside edge of this gulf. As the reef started to shift and erode, it formed the Niagara Escarpment. Enclosed in the Niagara escarpment are many small fossils that are not only cool but also show how old this formation is.

Old Baldy is a defining feature of the Beaver Valley and we are so fortunate to be able to experience it. We often only think of Old Baldy as only a recreational hiking spot but, it is fascinating learning about how it was formed.